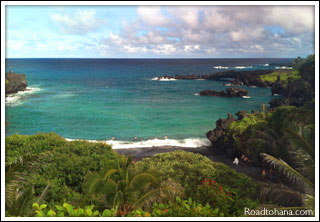 UPDATE: you have to make reservations ahead of time to enter the State Park!

The most immediately noticeable feature to the 120-acres that make up Wai'anapanapa State Park is the black sand beach named Pa'iloa. The translation for Wai'anapanapa is "glistening water" or "water flashing rainbow hues", both of which are accurate in describing the powerful contrast between the black, pebble lava field and the deep blue-greens of the ocean.

The Beach is small with a ocean cave on the east side that can be traveled through to the ocean. There's also a naturally made lava arch in the water.

This is one of the best things to do in Hana.

2 caves are available to visit via a labyrinth cut through hau grove on a loop trail. The caves are filled with freshwater that floats above salt water, of which some believe had been used for preparing food or washing kapa in ancient times.

These caves are the scene of tragic legend that ended in Popo'alaea's murder. She was the wife of Chief Ka'akea, of whom she ran away from due to his cruelty. She and her attendant hid in these caves until her reflection was seen by Ka'akea. Every spring, on the night of Ku, red shrimp cover the cave floors making it blood red. This marks the anniversary of Ka'akea's bloody murder of his wife and friend.

This area was home to the ancient Hawaiians, proven by the over 34 ancient sites found here. These sites include a heiau, 5 cave shelters, an ancient trial, 1 pictograph, 6 hu, 2 v-shaped shelters, 5 miniature enclosures, 3 shelter walls, 2 house platforms, and several burial sites.

Kihaapi'ilani Trail can be taken from here to Hana Town via a stepping stone path (which takes at least 2 hours.)

The 5 x 4 inch pictograph was possibly painted with kukui nut dye depicting a figure that could be dancing with some kind of ornaments on his/her arms/wrists. Hawaiian Pictographs are ONLY found in East Maui.

Wai'anapanapa is without a doubt one of the best campgrounds on Maui. With excellent swimming, hiking trails and amazing sunrise views, we highly recommend an overnight adventure. Camp Maui-X offers everything you'll need once you arrive on-island, including camping gear rentals, rooftop camping on SUVs or trucks, and even guided camping excursions with catering and more. 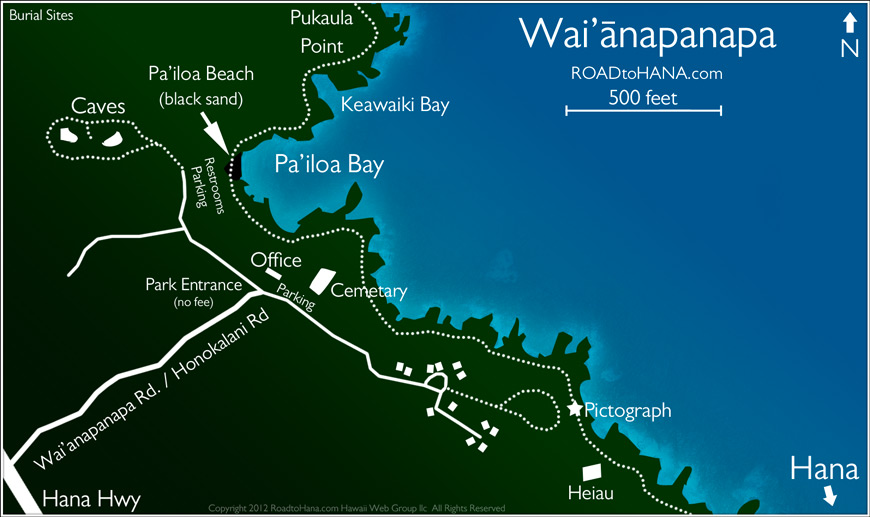 Much thanks to Van James with Ancient Sites of Maui, Moloka'i, Lana'i for the additional insight into Wai'anapanapa. We recognize the use of diacritical markings of the (modern) Hawaiian language including the ʻokina [ʻ] or glottal stop and the kahakō [ō] or macron (e.g., in place names of Hawaiʻi such as Lānaʻi). However, you may notice these diacritical markings have been omitted on some parts of this website to ensure the best online experience for our visitors. We recognizes the importance of using these markings to preserve the language and culture of Hawaii and respectfully uses them in all communications beyond the online platform.