Wailua Valley is an ahupuaʼa that sits just after the Keanae peninsula on the road to Hana. The area, though small, is rich in Hawaiian culture. It is here that an abundance of rare culturally significant fish and plant life can still be found. The area holds many ancient taro, or kalo, patches; a number of which are still in operation. In Hawaiian legend, taro is literally the older brother of all Hawaiians. And, so “Mahiʼaiʼana”, or cultivation of the land, is an ingrained principle that has endured for the people of Wailuanui.

The Wailua - Keanae area receives 100 to over 300 inches of rainfall per year in the rainforest, and is the largest single source of surface water in the state. It is one of the few places in Hawaii that one can still catch oʼopu (Hawaiian stream gobies), opae (fresh water shrimp), hihiwai (Hawaiian stream snail). Oʼopu were once prized and used as a source of income for many fisherman in the area. However, with the diversion of the stream water to central Maui, many of these animals have become increasingly hard to find. The Oʼopu is now so scarce in Hawaii, that commercialized sale of the fish is banned.

Olona, the cordage fiber used in the famous Hawaiian feather capes and cloaks was also cultivated here up until the mid 1800ʼs. A member of the nettle family, this fiber was used for making fishing lines, fish net, koko or slings, and was a valuable trading commodity. This prize possession is so strong that it was passed down and used for multiple generations. However, the plant is finicky and can only grow in certain areas of Hawaii, making Wailua and nearby Keanae very respected areas. (Visitors to Hawaii can view the Olona feather capes, cloaks and/or nets at the Bailey House Museum in Wailuku, Maui, or at the Bishop Museum in Honolulu.)

Other plants that visitors will see growing throughout the area are colorful ti, croton, plumeria, ginger, heliconia, and ferns like hapuu. There are also a variety of trees and shrubs like coconut palms, mango, avocado, various types of citrus, banana, guava, Hawaiian noni, manila palm, gardenia, and an occasional rubber tree to name a few. 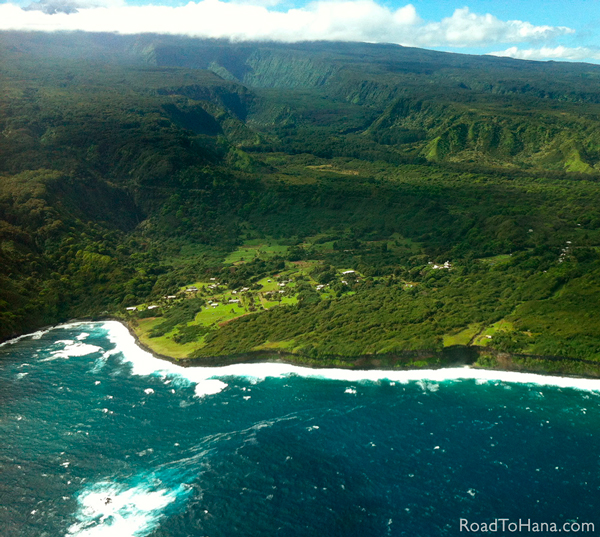 In fact, this area is so rich in natural resources that it was left unscathed during an epic war, in which chief Hoʼolae-makua of nearby Hana, Maui, was battling the exiled Kiha-a-Piilani of Maui and chief Umi-a-Liloa of the Big Island of Hawaii. The chiefs from both islands, realizing the importance of this abundant breadbasket, did not pillage the area.

It was here in 1778, anchored offshore in the Resolution, that Captain Cook and his crew were received by the people of Maui during his second and fatal voyage to the Hawaiian islands. With the arrival of Captain Cook, missionaries and developers soon followed changing the landscape and lifestyle of much of Hawaii. But, due to its inaccessibility, Wailua has been slower to change.

The Great Mahele, or division of Hawaiian lands, started in 1845. It was a disruption to Hawaiian culture as it broke up the ahupuaʼa, which are divisions of land that reach from sea to mountain. These divisions were constructed as a means of sustainably cultivating its natural resources. Huis, or partnerships, were formed so that residents could acquire and have access to all portions of the ahupuaʼa, from kula (pasture) to the sea. Maintaining the ahupuaʼa was crucial in cultivating taro.

In 1852, Chinese laborers arrived to the area to work the sugar fields that had been developed in nearby Hana. These laborers began to lease the taro patches in Wailua and develop it into rice paddies.

Driving along the Hana Highway today, it is not uncommon to see localsʼ handmade signs lamenting the loss of water flow to their precious streams, which has greatly affected the local plant and wildlife. “Water rights” have become a huge point of contention for East Maui residents. This is because of the Koʼolau Ditch system that was built to divert water from the areaʼs many streams to central Maui for sugar cane production. The local streams dried up completely, or became a trickle of what they once were, making taro farming an even more arduous process. Building of the ditch system was begun by Japanese laborers in 1876, and finished completion in 1923.

Before the Hana Belt Road, or Hana Highway was completed in 1926, the main modes of transportation to and from Wailua were footpaths, canoe, boat, or the Piilani trail. The completion of the Hana Highway finally allowed for easy access to a once very remote area, quickly adding new pressures and influences from the outside world. Only four years later, the 1930 directory showed that this was the first time that taro planters and homesteaders were outnumbered by wage laborers.

WWII definitely hit close to home when a Japanese submarine torpedoed a ship in the Alenuihaha Channel off Mauiʼs East coast, killing 29 people. Two caves were dug where explosives were stored; ready, should an invasion occur, to be used in the bombing and destroying of the Hana Highway. “Young men left their taro fields [to fight in the war] and many never came back,” one local resident remarked.

The obscure location of the area has kept the population small with little diversity. In the 1959 census, the population of the Keanae- Wailuanui area was 195. It was dubbed the “most Hawaiian in the Islands” as the area possessed the “greatest concentration of Hawaiians of any community in Hawaii, with 94.8 percent of the residents having pure-or part-Hawaiian ancestry”.

The lifestyle and culture here reflect the old ways, the importance of aloha, and caring for the aina (land). “Life is easier here than the outside world. Here, can hunt, can fish, can farm” - Charmaine Day, local resident. 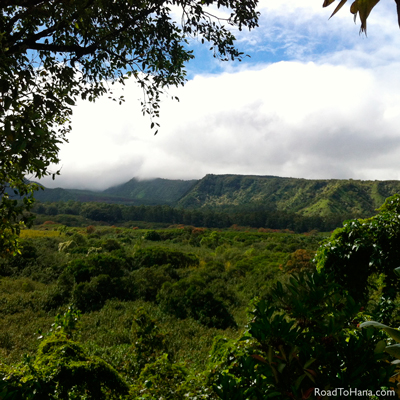 Saint Gabrielʼs Church and Our Lady of Fatima Shrine - located on Wailua Road, is a Catholic church that was built in 1860 out of white coral. Legend has it that It was dubbed the “miracle church” after a group of Protestants were selfishly hoarding the white coral for a church that they were building nearby. After a few strong storms, the sea had washed all the coral away from the Protestant area and left it all deposited on the Catholicʼs land. The white stucco walls are made of limestone with blue stenciling; and, there is a rare gambrel roof. (Wailua Road turnoff is on the left, just after mile marker #18)

Waikani Stream Bridge - (After mile marker #18) This has been called one of the most impressive bridges in Maui. Built in 1926, during the completion of the Hana Hwy, it is unique in that its structure type is a continuous concrete arch- deck. The single arch is 83 feet in length, and has a dramatic appearance.

Waikani Falls - seen in the distance, mountainside, when standing along Wailua Road.

Wailua Valley State Wayside Park - Easy to miss, located just past mile marker #19 on the RIGHT hand side of the road. There are stairs on the right, leading to a vantage point that provides views of Wailua Valley, Keanae Peninsula, distant waterfalls, and the Koolau Gap when facing inland.

Wailua Lookout - This is your last view of Wailua while heading into Hana. The pull off will be on the LEFT hand side of the road, about a 1/4 mile past the Wailua Valley State Wayside Park. The lookout provides a spectacular view of Wailua village. 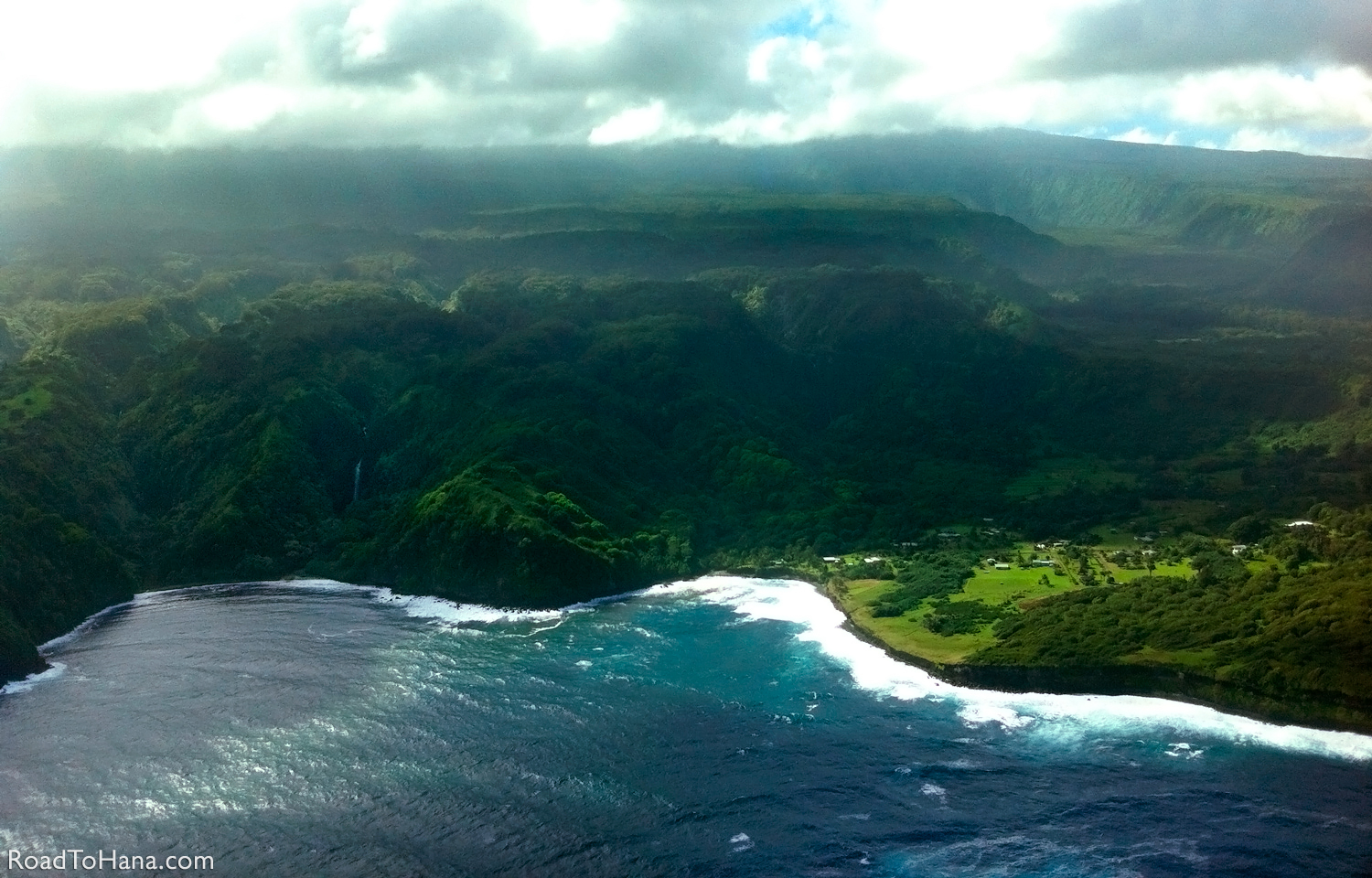