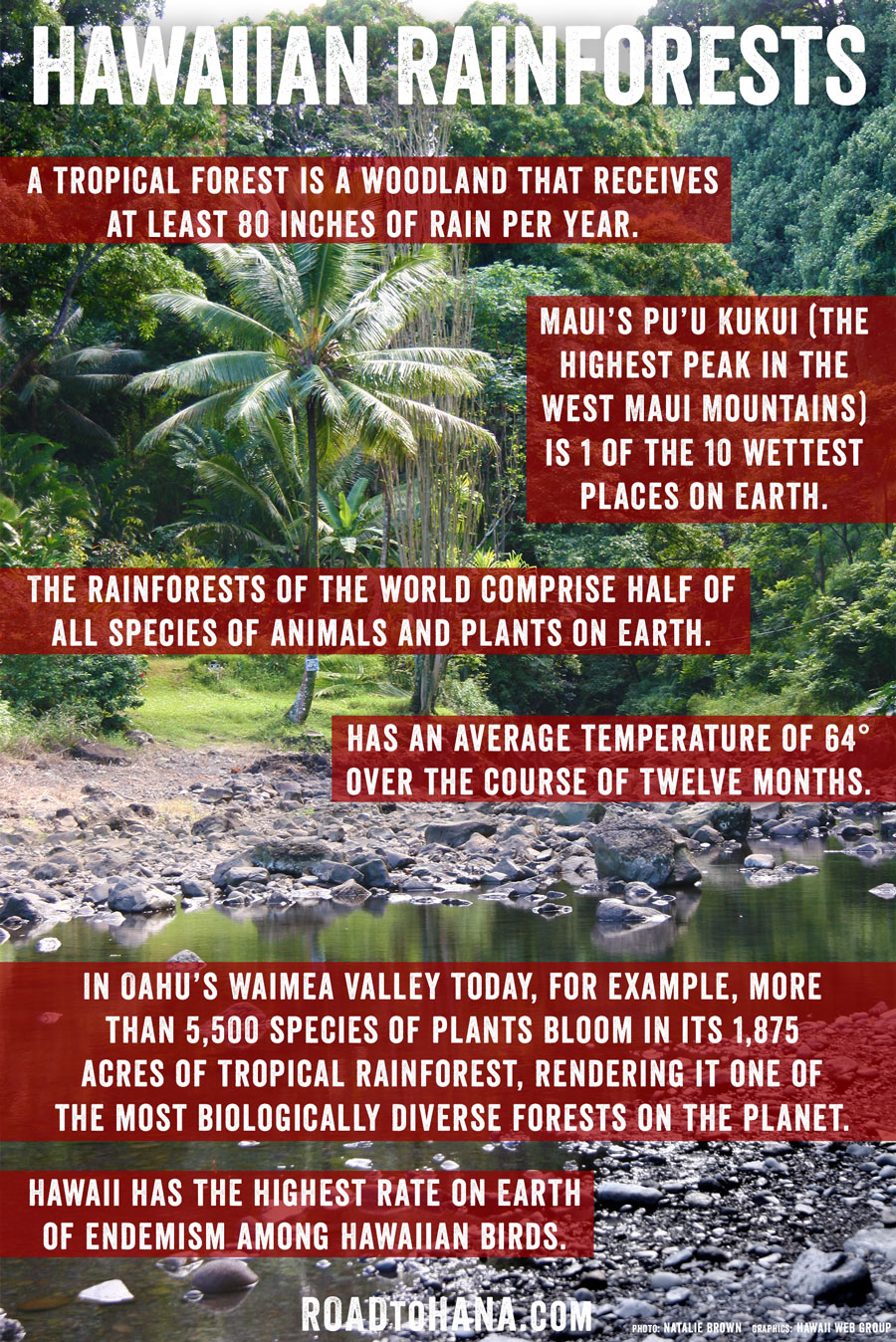 Perennial sunshine, epic surf, glistening sand—Hawaii’s got it all when it comes to beachy pleasures, explaining why its glorious coves are often voted the best beaches on the planet.

The idea of a rainforest in Hawaii might be perplexing to some, particularly those who are under the impression that our islands see only day after day of sunshine. But Hawaii’s six main islands—the Big Island, Maui, Oahu, Kauai, Molokai, and Lanai—also see more than their fair share of rain, with Maui’s Pu’u Kukui (the highest peak in the West Maui Mountains) going down as one of the ten wettest places on Earth and Kauai’s Mount Wai‘ale‘ale as the second. (Fittingly, its name translates to “overflowing water.”)

Such an abundance of rain has led to flora and fauna that, while fragile, is positively thriving. Take in the fact that for roughly 70 million years, Hawaii existed in isolation from the rest of the world by a great swath of the Pacific—wherein plants and animals had to hitch rides on birds, gusts, or waves—and you’ll start to understand just how formidable and unique the creatures in our tropical jungle are. (So enchanting, in fact, that in 2010 Hawaiian rainforests became indelible across the world in a U.S. postage stamp.)

So whether you’re planning a day journeying through Hana on Maui’s remote eastern coast or hiking the Akaka Falls Loop on the Big Island, here’s the lowdown on Hawaiian rainforests—and why they’re every bit as magical as they sound.

What are rainforests, anyway?

Bogs, coastal mesic forests, mountain forests—yes, nuances exist, but the short answer is this: A tropical forest is a woodland that receives at least 80 inches of rain per year.

That alone is impressive—to give you some perspective, Kihei, a popular tourist town on Maui, receives a mere ten inches per year, while ultra-green Hana gets more than 400—but rainforests are also distinguished by having the largest concentration of biological diversity in the world. (Think of the awe the Amazon Jungle inspires, or the tales of intrigue that surround the Congo.) Indeed, the rainforests of the world comprise half of all species of animals and plants on Earth, with the Amazon containing 20% of the world’s bird species. What’s more, the plants and animals found within rainforests are distinctive for the symbiotic relationship they relish, often working together as a community to survive and thrive. (One example of many is that many plants create “housing structures” and sugar for ants.)

Additionally, to classify as a rainforest, a woodland must present an average temperature of 64 degrees over the course of twelve months—thus explaining why rainforests are found in the warmer regions of the world: North-East India, for example, as well as Eastern Australia, South Japan, New Zealand’s North Island, South America, and the Pacific Islands. In the Pacific—which possess 25% of the world’s rainforests—rainforests are found on the windward lowlands and “montane” areas (or cloud forests) of the islands, and are often characterized by the canopy of trees that make up their gorgeous, stunning ceiling. 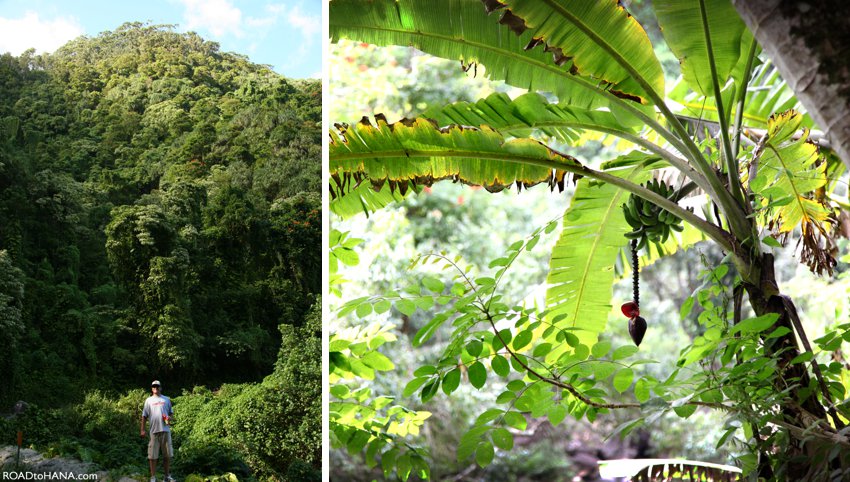 And what can I find there?

Whether you’re on Kauai or Molokai, entering a Hawaiian rainforest is akin to walking into a botanist’s wildest dream—a place that’s practically pulsing with plant and animal life. Poetics aside, each rainforest teems with flora and fauna so magnificent they’ll give you whiplash. Begun among volcanos approximately four million years ago, the Hawaiian rainforest started as an accumulation of life that rapidly became bountiful, where spores of algae, fungi, lichens, bryophytes, ferns, and from seeds of about 275 flowering plants that, over the millennia, evolved into 1000 endemic species, Harvard University reports. In Oahu’s Waimea Valley today, for example, more than 5,500 species of plants bloom in its 1,875 acres of tropical rainforest, rendering it one of the most biologically diverse forests on the planet—and explaining why Lost was filmed within its shadows.

Both endemic and introduced trees dominate the rainforests of Hawaii. Hala, for example—thatch screwpines that produce pineapple-shaped flowers—flourish throughout the islands alongside ‘ohia lehua (a flowering evergreen known for its fiery red and brilliant yellow “feathers” and whose wood was once used to build canoes, homes, and spears) and hau—a “sea hibiscus” that can reach 33 feet. Other startling beauties include rainbow eucalyptus—a gum tree that sheds its bark in sensational strips of color—koa (a tree that’s native to Hawaii, and serves as the largest and second most common tree in the islands), ‘olapa, a member of the ginseng family that’s also endemic to Hawaii, guinea grass, kukui, and ironwood.

The vines that wrap around these splendors are just as riveting. Maile—a lightly fragrant vine native to Hawaii—grows in profusion, as does ‘le’ie, a “woody climber” once used to construct fish baskets in ancient Hawaii. Ferns and mosses are just as plentiful, from the snake-tongued ophioglossum to the mat-forming uluhe and the fringey hapu’u pulu.

Also prolific? Strawberry guava trees, ‘ulu (or breadfruit—the world’s largest collection is found in Maui’s Hana), mango, varietals of banana and sweet potato, and taro, one of the biggest staples among the diets of ancient Hawaiians and the exclusive ingredient in poi (save for water).

Here’s something to consider: While the Amazon Jungle may host 20% of the world’s population of birds, Hawaiian birds give new meaning to the word rare. According to World Atlas, Hawaii has the highest rate on Earth of endemism among Hawaiian birds. From the nene goose—Hawaii’s state bird, and a species found only in the Aloha State—to the ‘apapane and ‘amakihi, our avifauna is genuinely one-of-a-kind.

While the birds of paradise—Hawaii’s paradise, that is—also have a tragically high rate of extinction (of its 140 native species, there are now about 43, of which 33 are endangered, leading some to call Hawaii “the bird extinction capital”), step into a Hawaiian rainforest today and you’ll be immediately and splendidly harmonized. The rainforest provides well for the winged, chatty creatures, where old-growth, towering trees, plants, and grasses offer ample shelter. 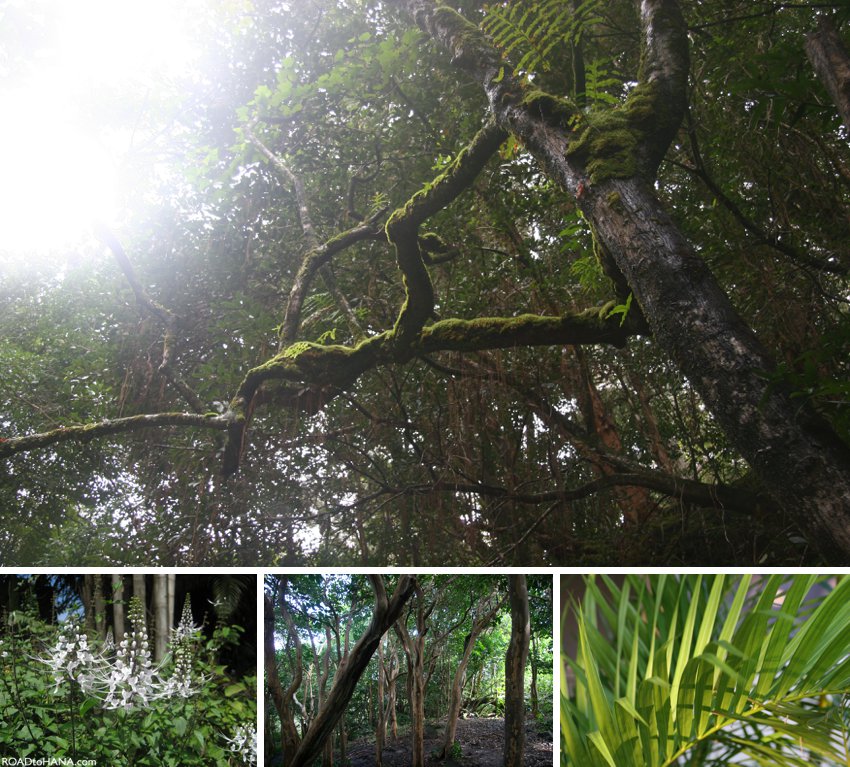 One of the most prevalent among these woodlands is the aforementioned ‘apapane. Otherwise known as the Hawaiian Honeycreeper, this red-feathered gem flocks the forest in numbers—especially in places prospering with ‘ohia—and have one of the greatest variety of bird calls among the islands’ avian population. Also found within Hawaii’s rainforest? The yellow-plumed ‘amakihi, the ‘elepaio—a small, brown bird, savvy fly-catcher, and frequently-named aumakua (or spiritual guide) among canoers, and the much loved ‘i’iwi—the third most common land bird in Hawaii and one of the most enduring symbols of the state. One might also come across the Hawaiian Hoary Bat, one of four mammals endemic to Hawaii and a stark reminder of the islands’ vast diversity, the Hawaiian Petrel, and the ‘io, or Hawaiian Hawk.

But birds aren’t all you’ll find among our rainforests. Snails roam the understory, including the endangered Amastra spirizona, a nocturnal, cone-shelled snail, endemic to Oahu, that holds the title as one of the rarest animals in the world. The Happy-face Spider—which looks exactly as it sounds—can also be found, as well as feral pigs, anoles, frogs, carnivorous caterpillars, and the pinao, the largest and fastest-flying dragonfly in the U.S. 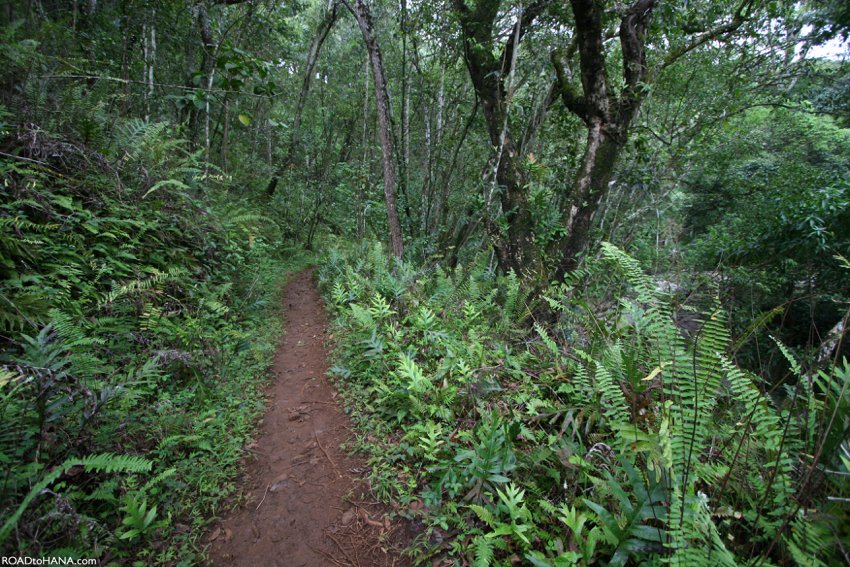 The Future of Hawaiian Rainforests

Fragility was mentioned earlier—and for a good reason: In 2008, scientists examined 850 square miles of rainforest on the Big Island to get a better sense of the woodland’s fortitude. Using remote-sensing instruments aboard an aircraft—devices that can test the chemical and structural properties of species—they found that “invasive trees are changing the structure of the Hawaiian rainforest by denying native species valuable resources, such as sunlight,” National Geographic reports. The aforementioned ‘ohia, for example, is “thinning out” due to the encroachment of non-native species like firetree and tropical ash. And it isn’t just the trees that feel the impact of invasive creatures: humans, too, may ultimately be effected by the change in the amount of carbon created by invasive species, while the increased canopy and lack of light penetration “shade out” some of the native trees relied upon in traditional Hawaiian ceremonies. Further, the ohias in danger, as Outside puts it, are “a keystone of the islands’ native ecosystem,” making up a “huge majority of its canopy” and providing coverage “for low-lying plants and food and habitat for honeycreeper birds.” “This is one of the first illustrations of the impacts of invasive species on native, intact tropical forest at a large scale,” says ecologist at the U.S. Department of Agriculture’s Institute of Pacific Islands Forestry Julie Denslow. “It highlights the vulnerability of protected areas to invasive species and the need for aggressive management to maintain conservation values.” (Government has taken note: In June of 2017, Hawaii’s Governor David Ige defied President Trump by signing a bill committed to restoring the islands’ soil health, announcing “as an island state, we are especially aware of the limits of our natural environment.”)

Global climate changes aside (that’s another post entirely) what remains, for now, is the life-giving gifts of Hawaiian rainforests, whose dense canopy acts as an umbrella to intercept rain and whose understory operates as a giant sponge, thereby supplying the islands’ streams with pristine hydration—and its population and visitors with fresh water. What also persists is our rainforests’ exquisite beauty, which is always changing—and yet always remains. 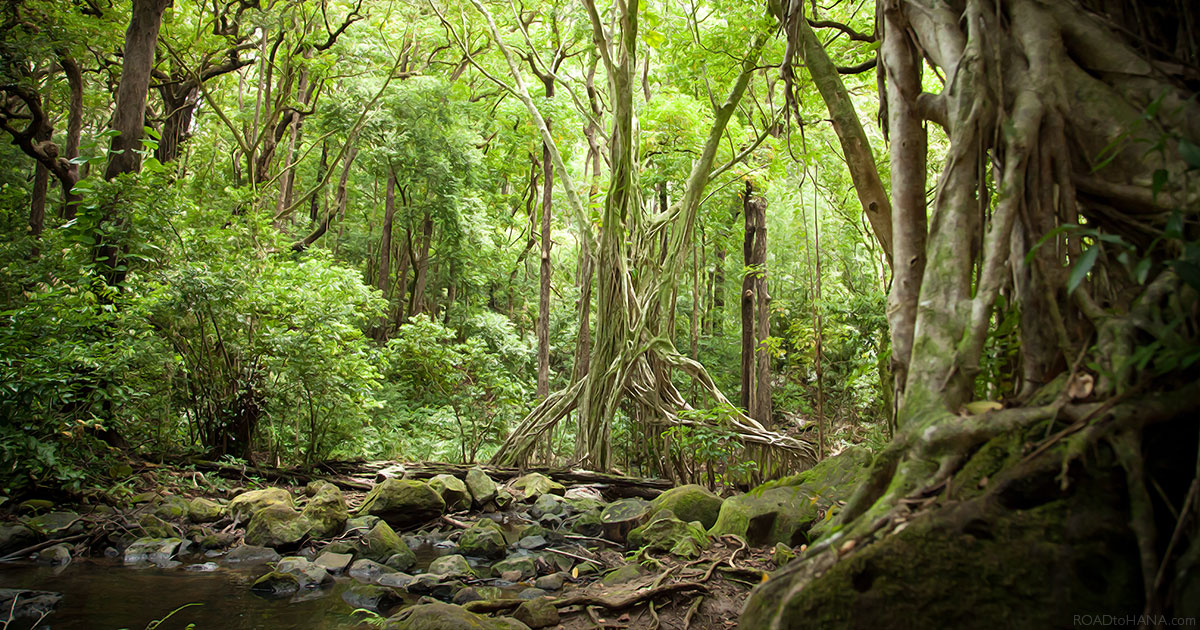 Experience Hana at your leisure, and enjoy local knowledge and fun activities. 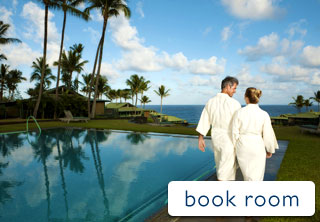 Brand new luxury vans driven by passionate guides to the best sights along the Road to Hana. 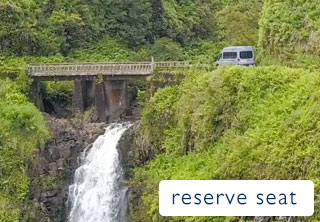 Grab snacks, refreshments and a packed lunch at Kuau Store.

Explore Maui's rainforest cliffs and waterfalls by rappelling down them.

Take the worry out of driving the backside from Hana with a smooth, lifted ride.