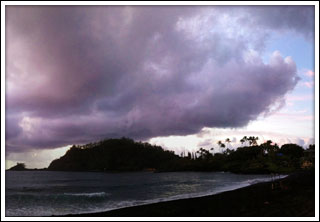 Hana, and it's surrounding areas, is considered "Real Hawaii" by many due to it's having remained unchanged relative to the rest of Hawaii's development. This small town is quiet, beautiful, and a very important place for the people of Hawaii.

When visiting Hana, make sure to learn about the history that happened here. Otherwise, you may blow through town without any idea of how significant this small coastal town is. Read below for history and legends. 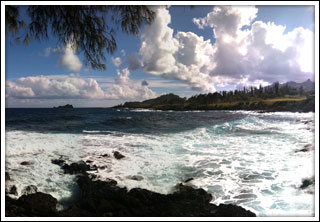 Some of the highlights include:

Hana is the perfect spot to stop and recharge. Grab some food, visit the Cultural Center, and take a walk along the ocean. 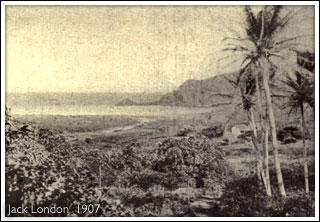 Hana has a deep, rich history that begins when the people of the Marquesas islands first came to Hawaii. Since then, the following events occurred:

• 1759 to 1779 - Kalani'opu'u of the Big Island captured and held power over Hana. Eventually, West Maui chief Kahekili surrounded him and forced Kalani'opu'u forcing retreat to defenses on Ka'uiki Hill. Kahekili defeated him by stopping all freshwater flow to the hill and forcing them to surrender.

• 1768 - Queen Ka'ahumanu was born in a cave at Ka'uiki Hill. She was King Kamehameha's favorite wife and largely responsible for the abolition of the Kapu System.

• 1802 - Kamehameha used Hana to rebuild many Heiau to honor his god, Kuha'ilimoku, and went on to conquer all of the Hawaiian Islands.

• 1849 - Sugarcane is introduced to Hana via a sugar mill by George Wilfong. In 1883, there were 6 plantations in operation. Before this, the area of Hana and the neighboring Ko'olau districts survived by cultivating dryland taro and local fishing.

• 1944 -The Hana Ranch begins with 14K acres by Paul Fagan. He shut down all sugar production at Ka'eleku in favor of cattle ranching operations.

• 1946 -A massive tidal wave hits Hana, kills 12-14 people, leaves 550 homeless, completely destroys 77 homes and damages 156 more. At this time, all of the sugar plantations have closed down.

• 1946 - Paul Fagan opens up the Ka'uiki Inn (Hotel Hana-Maui), which is still in operation today as the Travaasa Hana Resort and Spa. Fagan owned the San Francisco Seals baseball team, of which were some of the first guests for preseason training. He invited many journalists to document their training, which helped in creating the hotel's initial tourism buzz.

• 1974 -After previously having fallen in love with the Hana area and people, Charles Lindbergh returns to Hana on his deathbed to finish his days in paradise. His grave can be found today in Hana.

• 1974 to Today -A large part of the charm of Hana is that very little has happened since then that would be news-worthy, other than land and hotel changing ownership. The people of Hana have fought hard to keep Hana a pristine, under-developed home. Though development has happened here and there, they've managed to keep Hana relatively untouched. 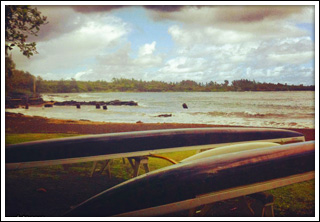 
Ka Iwi O Pele
The hill beside Koki Beach is said to be the site where the fire goddess Pele fought her older sister, Namakaokaha'i, goddess of the ocean. Here is where Pele's bones rest after her defeat, though her spirit went to Kilauea on the Big Island of Hawaii.

At some point afterwards, a chief from the island of Moloka'i was visiting Hana for a surf contest. After he scoffed at the idea that this was a sacred spot, Pele turned him into a huge eel, and he slithered into the ocean. A 30 foot scar in the land can be seen in the lava rock shoreline. This formation can be seen via a trip to Leho'ula Beach via horseback with Travaasa Hana Hotel.

It is also said that Pele was ravished by her enemy, Kamapua'a, the Pig God at this spot. Another legend speaks of the mythological being Lonomoku leaving the Earth, from this hill, to live on the moon. The God Maui has also been said to have pulled the Hawaiian Islands from the sea with his fish hook from this location. His hook is said to have caught Ka'uiki Head, which brings us to another important location.

Ka'uiki Pu'u
The hill at Ka'uiki, on the south east side of Hana Bay, is famous for legend and historic events. You may notice that clouds rarely touch the summit of this hill, which is due to the demi-god Maui having pushed up the sky in order to get a drink of water from a young woman. This is also where the son of the fish god Ku'ula, made a ko'a called Makakiloia and a ku'ula for the people of Hana, which is why the waters are plentiful. Ku'ula's son, Ai'ai, is credited for having made many fish shrines and having spread the knowledge of his father throughout the Hawaiian Islands. He helped the people make fish lines and lures as well as master the art of fish husbandry and helping the people gain favor from Ku'ula with Ko'a.

One favorite legend describes how Maui's daughter, Noenoe, fell in love with Ka'uiki, the adopted son of the menehune. Ka'uiki was brought to the menehune by the sea and was therefore thought to be a blessing from the God of the sea, Kanaloa. There love could never be because Ka'uiki would have to eventually return to the sea. Though painful, Maui gave into his daughter's request to help them using his magic. He turned Ka'uiki into the pu'u that sits on the southeast end of Hana Bay, and he turned his daughter into a misty, gentle rain. Noenoe still lovingly caresses her husband regularly as the mist against the hill. 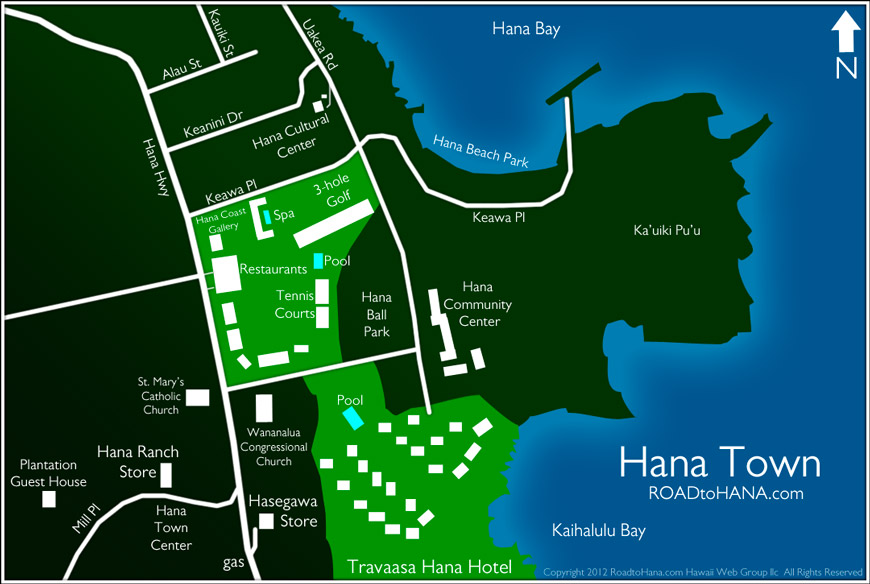 Much thanks to Van James with Ancient Sites of Maui, Moloka'i, Lana'i for the additional insight into Hana. We recognize the use of diacritical markings of the (modern) Hawaiian language including the ʻokina [ʻ] or glottal stop and the kahakō [ō] or macron (e.g., in place names of Hawaiʻi such as Lānaʻi). However, you may notice these diacritical markings have been omitted on some parts of this website to ensure the best online experience for our visitors. We recognizes the importance of using these markings to preserve the language and culture of Hawaii and respectfully uses them in all communications beyond the online platform.