On the first day of the festival, the Hana Ball Park becomes a hubbub of activity: food booths along the perimeter, entertainment on the main stage, vendors selling homemade arts and crafts, farmers displaying fruits and vegetables, nonprofits sharing their services and programs, and Hawaiian cultural practitioners demonstrating and teaching Hawaiian activities.

For many attendees, the food is the main attraction of the East Maui Taro Festival. Some families have been cooking food for the Taro Festival since its inception, using recipes that have been handed down for generations. They prepare for the Taro Festival at least a month ahead, gathering their ingredients and seeking taro grown on Maui. Sometimes this is a challenging process because taro is in high demand in the weeks before the festival. 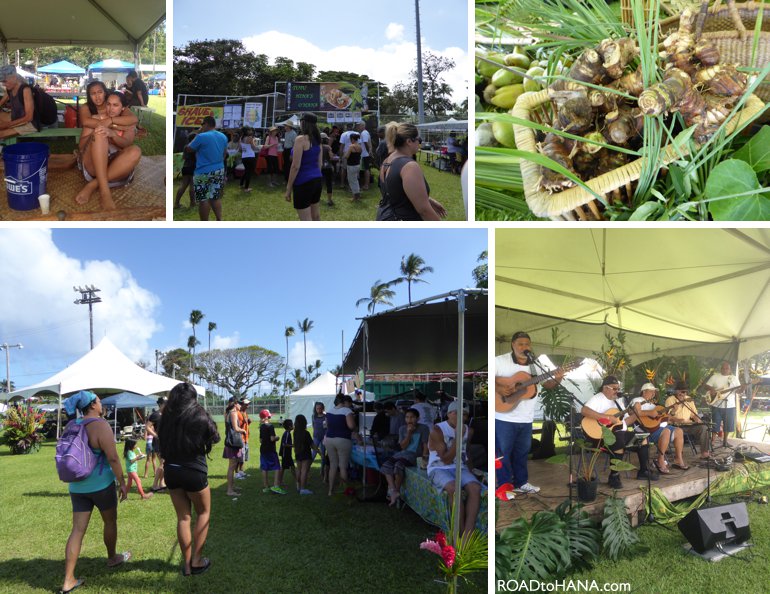 But what is taro? 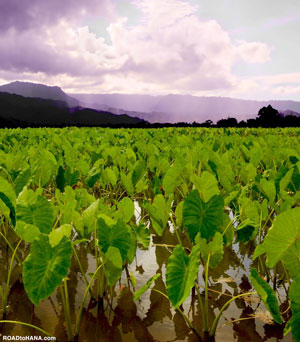 Taro, or kalo in Hawaiian, is a staple food crop. Every part of the plant is edible: the enlarged corm which looks like a large root or tuber, the stems, the leaves, and even the flower. It must be cooked to remove the oxalic acid, which if eaten raw, makes one’s tongue and throat feel “scratchy.”

Almost every visitor to Hawaii first encounters taro, in the form of poi, at a luau. Poi is considered the most Hawaiian of foods, made from mashed, cooked taro. The gleaming poi looks like a delicate purple pudding. The novice foodie tastes the poi and then may set it aside, not used to the deceptively mild flavor or soft, gooey consistency.

But taro is so much more than poi. Taro can be prepared in many mouthwatering ways, to form a variety of tantalizing flavors and textures. Like a potato, taro can be boiled, fried, steamed, mashed, and baked. Taro can be mixed with other flours to make bread, or sweetened and prepared as a dessert. Taro can be cooked with minimal salt and seasonings or made as spicy and savory as one wishes. Taro is a dream food in the hands of a good cook.

Taro is a sacred plant in Hawaiian culture.

In one version of a Hawaiian legend, Father Sky and Earth Mother gave birth to a son, Haloa, who died at birth and became a taro plant. In this way, Haloa gave his life to feed his younger human brother. So taro is cultivated in Hawaii with deep respect and care, as a life-giving food and connection to the divine. Approximately 200 varieties of taro are documented in Hawaii. In ancient times, over 400 varieties were believed to exist.

Taro is grown throughout Hawaii. On Maui, taro growing regions include areas near Iao Valley like Waiehu and Waihee and the northern village of Kahakuloa, as well as East Maui: Keanae, Hana, and Kipahulu. Taro is also found in many other parts of the world and eaten as food. But perhaps nowhere other than Hawaii is taro so treasured. Given taro’s importance in Hawaii and in East Maui, the people of Hana and neighboring communities decided to create a festival celebrating this important plant and this symbol of Hawaiian culture. This festival has been taking place for more than 20 years. 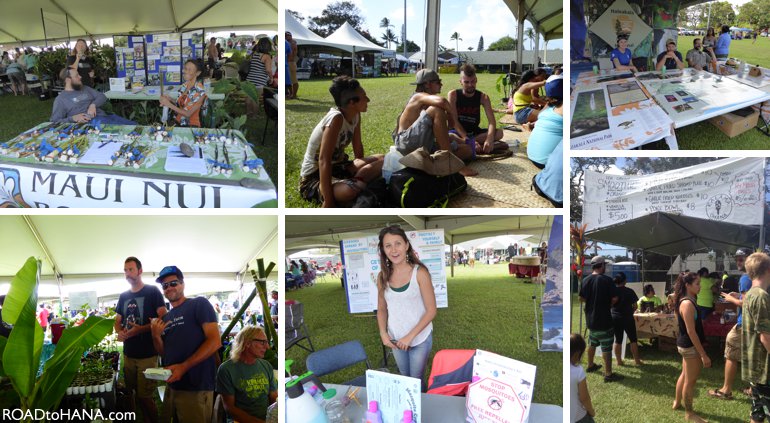 What taro dishes are found at the East Maui Taro Festival?


What else is there to eat besides taro?

There are many other things to eat, including familiar foods and local, ethnic favorites:


Some food booths make and deliver extra batches of their crowd pleasers, knowing that many people will come back in the afternoon to buy food to take home and savor the flavors of the festival after it ends. At one booth, a line of people forms in the afternoon waiting for the next delivery of freshly made seafood chowder. 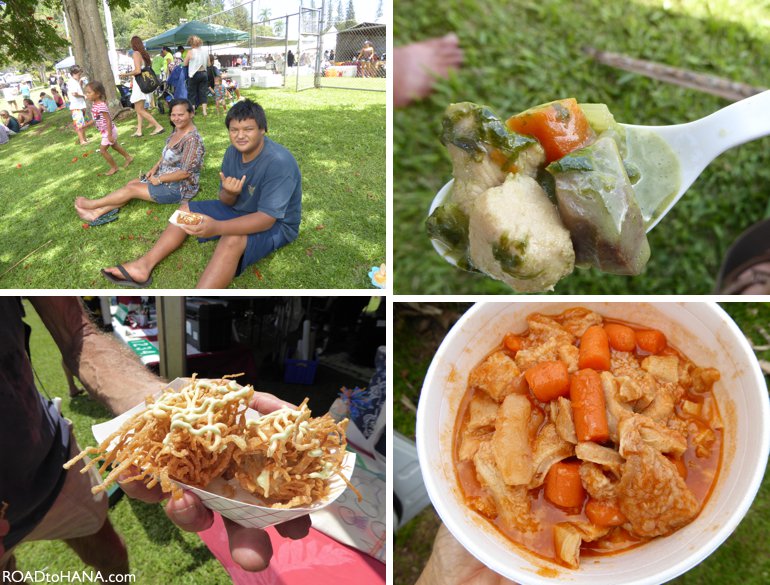 Day 2 and the Taro Pancake Breakfast

Food also plays a major role in the festival’s second day. The popular taro pancake breakfast is attended by 300-400 people on Sunday morning from 7:30 am to 10:30 am at Hana Bay. Tickets can be purchased for $8 at the festival booth on Saturday or $10 at the door on Sunday. Note: Prices are subject to change in the future. The pancake breakfast includes: taro pancakes, link sausage, eggs, and taro home fries. Other breakfast menu items include taro quiche, taro cinnamon rolls, and other pastries that use taro. Taro festival t-shirts and cookbooks are also for sale.

Not surprisingly, with all the food available, the covered dining tent is a popular place for festival goers. They can dine in comfort from the bright sun, while listening to the sounds of slack key guitar music and other live performers from the nearby entertainment stage.

Besides eating, there is so much more to see and do at the East Maui Taro Festival.

What Hawaiian activities are offered? 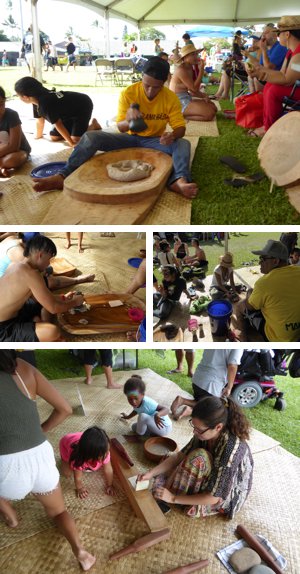 Under a large pavilion, people of all ages can try their hand at a variety of Hawaiian activities: poi pounding, lauhala weaving, Hawaiian checkers, and kapa making. All of these activities take place on the ground, on woven lauhala mats.

Poi pounding uses a stone pestle and a wooden pounding board. Pieces of taro are cooked, peeled, and cut into chunks, which participants pound by hand, in the traditional style. Water is added during the process to create a soft but thick paste called paiai*. Paiai is the stage before hand pounded taro becomes poi. The only difference is that poi uses more water.

Lauhala weaving uses the leaves of the hala or pandanus tree. The leaves are gathered, sorted, washed, cut into long strips, and sometimes dyed. Lauhala can be woven into mats, containers, fans, bracelets, and hats. At the taro festival, people have the opportunity to weave their own bracelets.

At the kapa making station, instructors demonstrate the art of pounding mulberry bark into kapa fabric, which was used to make traditional Hawaiian clothing. Participants may practice the art of flattening the bark smoothly and evenly to make a firm, supple fabric.

Konane is a Hawaiian game similar to checkers, with black and white colored rocks arranged in alternating spaces. The konane teacher teaches this game of strategy to beginners.

All of these activities are free. The entire festival, except for food and other purchases, is free. The festival is a labor of love by the people of East Maui to share Hawaiian culture and the pride in their community. 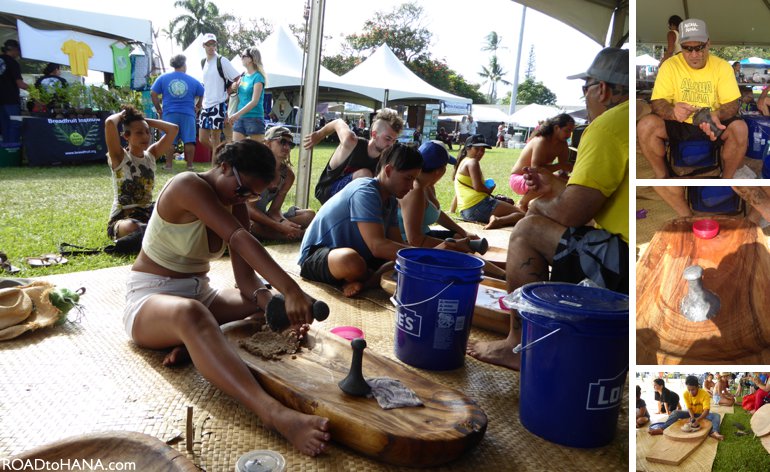 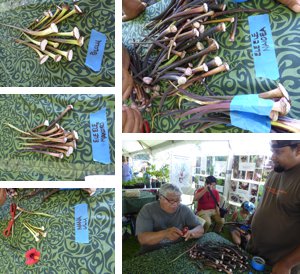 Gardeners and plant lovers will enjoy visiting the agriculture pavilion which has a variety of culinary herbs, exotic Asian vegetables, and coffee trees. Festival attendees can find plants that are used in traditional Hawaiian culture and cuisine: breadfruit trees, koa saplings, mamaki plants for tea, sprouting coconuts to plant, banana keikis (baby banana trees), vines to produce ipu – Hawaiian instrument gourds, and of course, taro. Many varieties of taro or kalo are available for free or for only $1.

Some varieties produce a harder or softer corm, have different flavors, grow better in different places, or are best cooked in different ways. The taro cuttings look like withered dried sticks but once planted and lovingly tended, they can produce a large harvest. Plant experts also help teach how to identify different varieties of taro, how to plant and cultivate taro, and how to harvest taro. 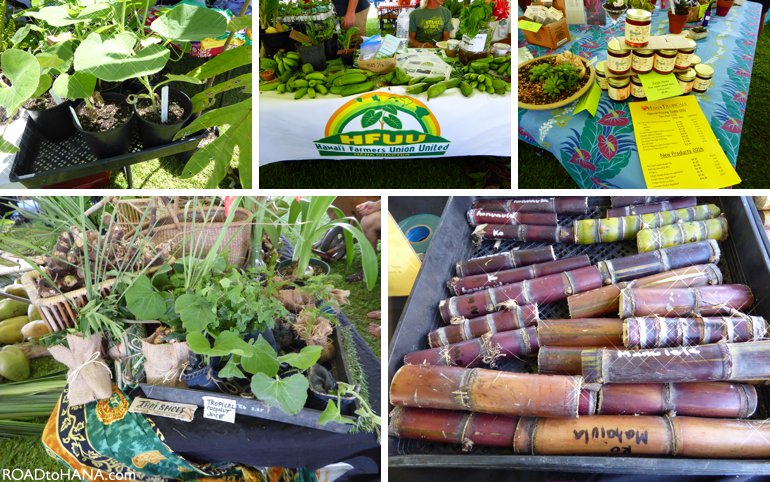 Even more to see! 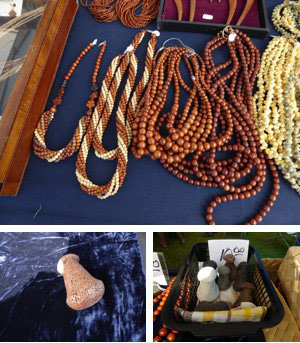 Along one perimeter of the Hana Ball Park are booths with jewelry, scrimshaw, Hawaiian sea salt, clothing, art, Hawaiian crafts, and household decorations. A community tent offers information on local resources: nonprofits and businesses provide information about their products and services, and government booths hand out brochures about disaster preparedness and pest prevention.


The festival starts closing down between 4 and 5 pm. Booths stay open until 5 pm unless they sell out earlier. The fun is not over because Sunday is the second day of the festival. Sunday opens with the popular community breakfast followed by Hawaiian cultural activities: visiting a loi, or wetland taro field, taking a tour at the National Tropical Botanical Garden, or learning to build a Hawaiian traditional hale or house.

Although the festival is not as large in size as some other festivals on Maui, there is no lack of activities to participate in, or things to learn and experience. For visitors or residents who want to immerse themselves in a weekend of Hawaiian culture and rub shoulders with people who call East Maui home, the Taro Festival provides an authentic experience with a rich community legacy. What’s more, it is free to attend. 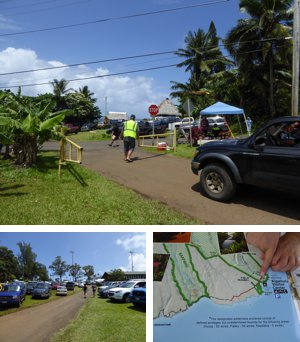 Stay overnight if possible. From Kahului, the drive is at least 3 hours long, and there is often traffic the morning of the festival. The best bet is to arrive Friday and leave Sunday afternoon or Monday morning.
Accommodations should be arranged ahead of time, because there are few if any vacancies on the day of the festival. The festival dates are picked a year in advance, usually for the last weekend in April.

If driving from elsewhere on Maui, there is often considerable traffic to Hana before 10:30 am, regardless of route: the Road to Hana, or the south side route via Ulupalakua and Kaupo. It’s best to get up early, and be on the road as early as possible – maybe 5 am – to avoid traffic. Or if one leaves later in the day, there is considerably less traffic after 11 am. Read other tips about the Road to Hana, making sure one has a full tank of gas, snacks in the car, and enough cash.

The most popular food items and crafts sell out by mid day. If one arrives in the afternoon, some of the booths may already be picked through. On the other hand, if one stays in the afternoon until closing, some booths will reduce prices or give away items for free.


Parking can be challenging. The Hana Ball Park parking lot fills up quickly, and there are other parking lots within walking distance, some of which are free, and others which have a parking fee.

Hana is known as the land of white misty rain, and is often cool and more lush than other parts of Maui. However, the Taro Festival is usually selected for the time of the year with reliably good weather, and the sun can get hot. Wear a hat and adequate sun protection. Yes, plenty of shade is available at the ball park. Local families often bring their small shade tents and beach chairs for the day.

Local dishes may be an acquired taste for some. Ask friendly looking people what food booths they enjoy. A good bet is if the food line is long, the food is probably good. Ask for samples if possible. Don’t be afraid to ask questions about the food. Some visitors bring salt and other seasonings. One can also buy Hawaiian sea salt at some of the booths. Hawaiian salt also makes an excellent souvenir.

Not all food dishes are sold at the food booths on the perimeter. Excellent prepared food items are found in the large pavilions, including the agricultural tent.

Have a wonderful time at the East Maui Taro Festival, and bring an appetite! To see the exact dates for the next Taro Festival, visit TaroFestival.org

*Paiai with Hawaiian proper diacritical marks is paʻiʻai. We recognize the use of diacritical markings of the (modern) Hawaiian language including the ʻokina [ʻ] or glottal stop and the kahakō [ō] or macron (e.g., in place names of Hawaiʻi such as Lānaʻi). However, these diacritical markings have been omitted on some parts of this website to ensure the best online experience for our visitors. We recognize the importance of using these markings to preserve the language and culture of Hawaii and respectfully use them in all communications beyond the online platform. 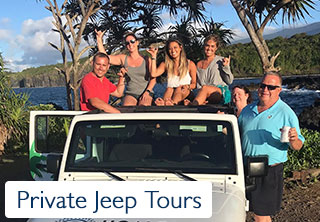